FIGURE 1. Illustration of the Toronto Provincial Lunatic Asylum.
BACKGROUND
To preserve the memories in others, history aims to draw in their audience through descriptive narratives; however, memories of those who have had first-hand experience will experience laden of emotions and nuance. What we understand of asylums will heavily differ from the memories of the patients and those who were involved during that time (Moon, Kearns, Joseph, 2015, pg. 24). Elements that evoke memory are categorized between personal memories and collective memories. Collective memories are often kept and preserved through matters such as historical sites, tourist attractions, ruins, and infrastructures that may have been “strategically preserved or even purposely built” (Moon, Kearns, Joseph, 2015, pg. 25). Asylums and mental institutions on the other hand are personal memories and traumas that belong to those who were stigmatized. Due to the stigmas faced, such infrastructures often bury their past (Moon, Kearns, Joseph, 2015, pg. 25).
HISTORY
Formerly known as 999 Queen Street West, the Centre for Addiction and Mental Health (CAMH) rebranded in the 1970’s in attempt to erase their bad reputation of the site and location and is now known as 1001 Queen Street West (Bradburn, 2012). Originally designed by John George Howard in the mid-1840’s, the old asylum building was demolished in 1975-1976. The original asylum building was inspired by the National Gallery in London and followed Victorian-era styles (Bradburn, 2012). The architect envisioned a cutting-edge mental health facility and incorporated exercise rooms to improve health and other activities. However, the building quickly took a downfall due to overcrowding and low maintenance funds (Bradburn, 2012).
INTRODUCTION
“PAIN” is a design research and spatial study project which seeks to answer the question of what pain is in architecture, and how a space can encapsulate memory. The goal is not to necessarily define what pain is, but rather explore and understand how architecture can potentially evoke and/or manipulate the feelings of pain and memory.
A place long forgotten that holds many painful and dark memories of its own, this study will take the West Wing of the Toronto’s Provincial Lunatic Asylum (as seen in Figure 2 below) as a case study to be manipulated and explored. The following project explores three case studies that look at the violent acts in architecture, specifically:
Rotation = Turning, twisting, flipping, overlapping, and mirroring
Tension & Compression = Squeezing, suffocating and pressurizing
Slicing & Cutting = Fragmenting, isolating and segregating
Displayed in the form of an exploded axonometric, the dissected case studies will allow for analysis and focus on how humans may or may not interact within these spaces, and conclude with what act is most successful in evoking pain and memory, and why.
DEFINITION
According to the Oxford Dictionary, “pain” is defined as:
1. Noun.
_ a) Highly unpleasant physical sensation caused by illness or injury.
_ b) Mental suffering or distress; An annoying or tedious person or thing, or great care and/or trouble.
2. Verb.
_ A) cause mental or physical pain to.
Types of pain may entail physical, emotional, mental, verbal, and sexual pain. 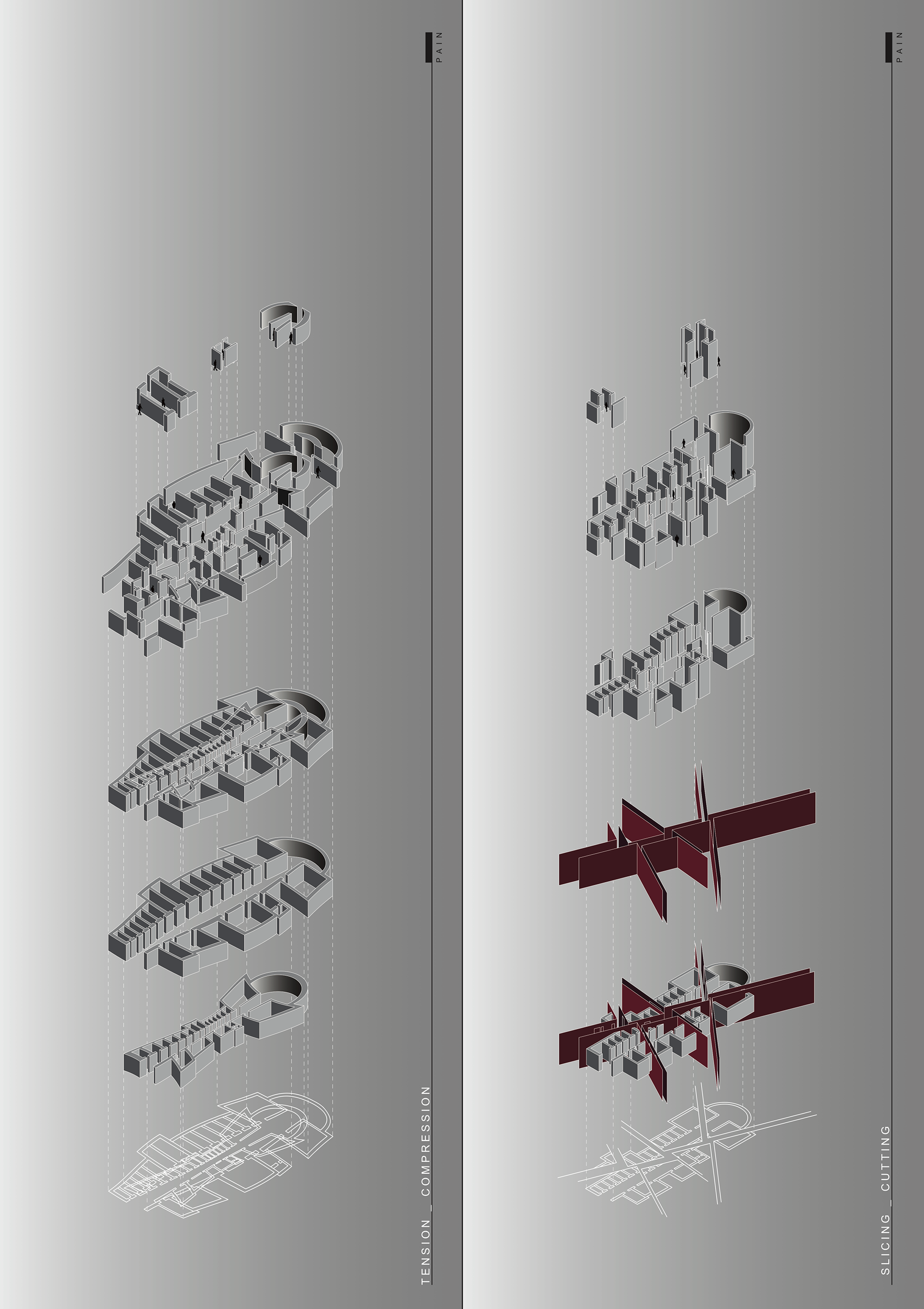 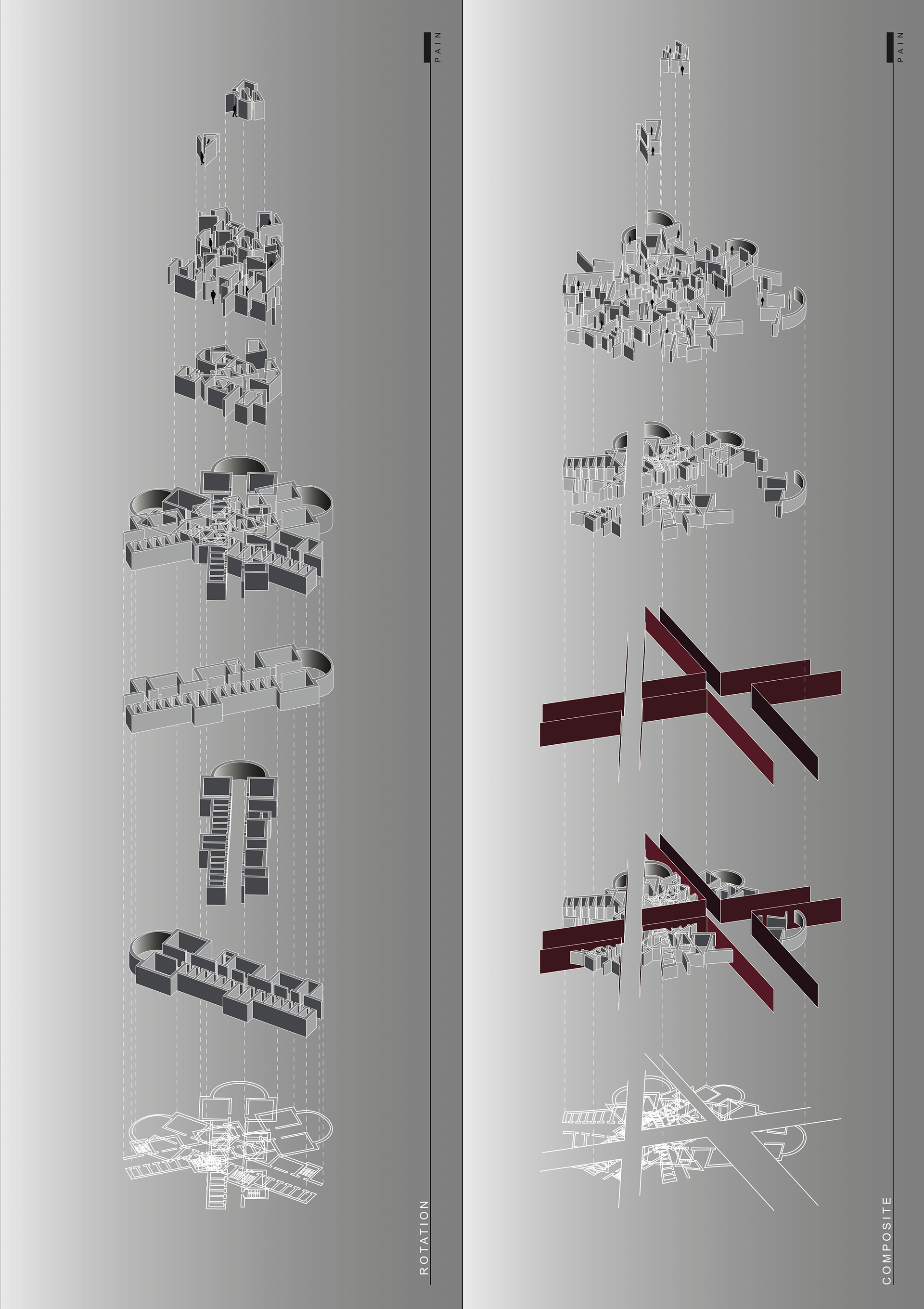 TENSION / COMPRESSION
When manipulating the floor plan through tension and compression, spaces become more narrow and claustrophobic. Corridors are elongated and as the walls explode, the space feels like a never-ending maze. This action leads to feelings of being lost, and potentially uselessness.

SLICING / CUTTING
Ironically, the violent act of slicing and cutting the floor plan lead to the cleanest results. As seen in the diagram, spaces are more organized and clean, and walls are exploded into smaller parts. Similar to tension/compression, slicing/cutting resulted in a maze-like structure, however, the space feels more organized in which one may be able to inhabit or navigate.

ROTATION
The action of rotating the floor plan causes extreme distortion as the plan overlaps one another. The central part of the plan where the pivoting point is becomes more concentrated and creates much smaller, suffocating spaces. Focusing in on these smaller spaces, it can be seen that walls become more jagged and sharp, creating tight angles and niches where it would be hard for one to stay in.

COMPARISON
The three case studies of the violent acts in architecture effectively convey pain by creating disorganized and suffocating environments. These environments evoke memories and emotions that potentially make the user want to either disengage from reality or trigger negative behaviours. The act of rotating a space was most effective in triggering pain as it created tighter and sharper spaces. Tension and compression was similar in creating disorganization and loss, however, it lacked the smaller “trapped” niches. Slicing and cutting of the plan was least effective when evoking pain as the act of slicing was too “clean”, thus creating an environment that was possible to navigate but ineffective when triggering emotions of pain. Rather, it effectively created a sense of confusion and being lost. 3D models printed (as seen below) show the Asylum's West Wing morphed through violent acts to give perspective of the interior space. 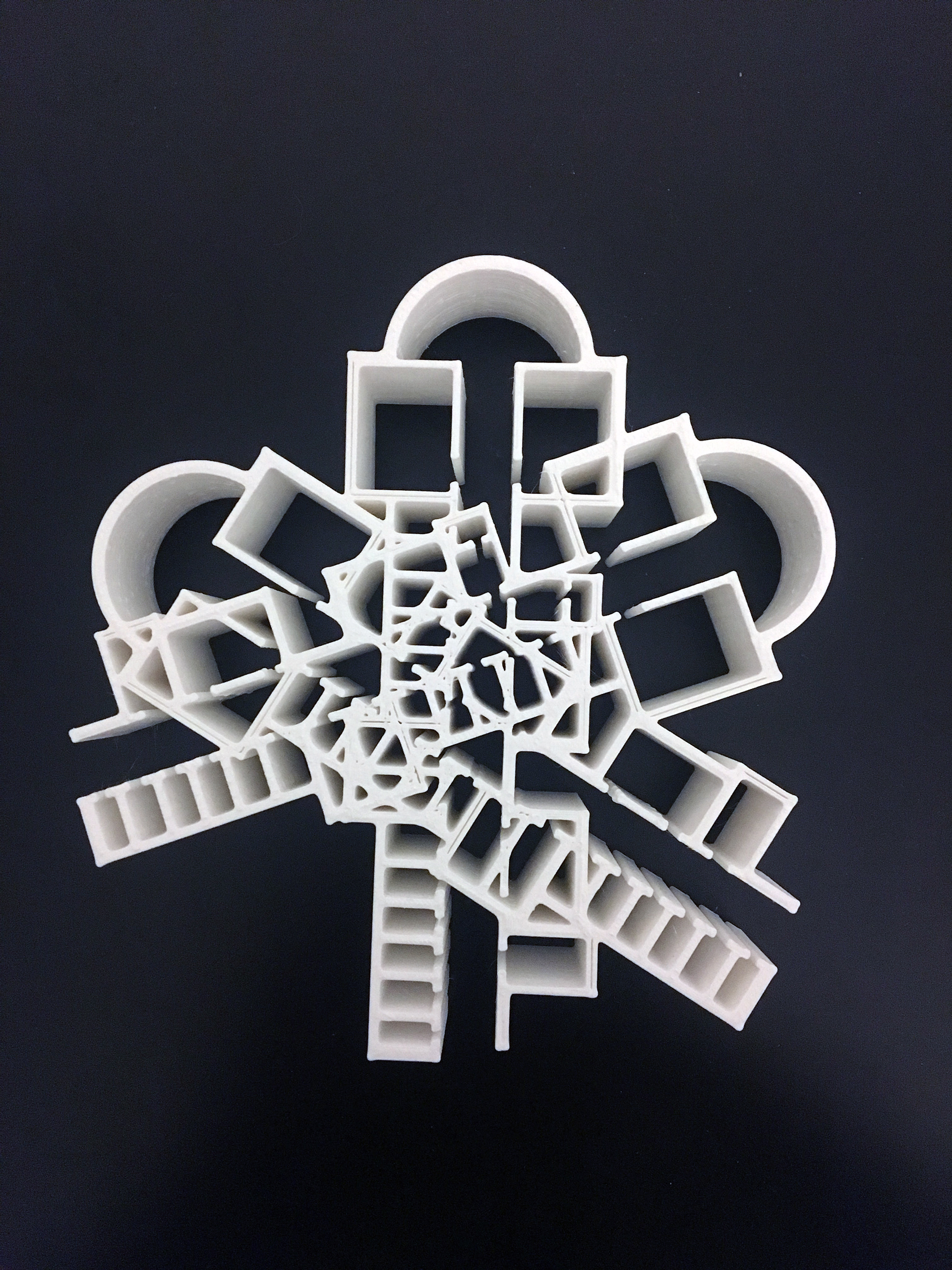 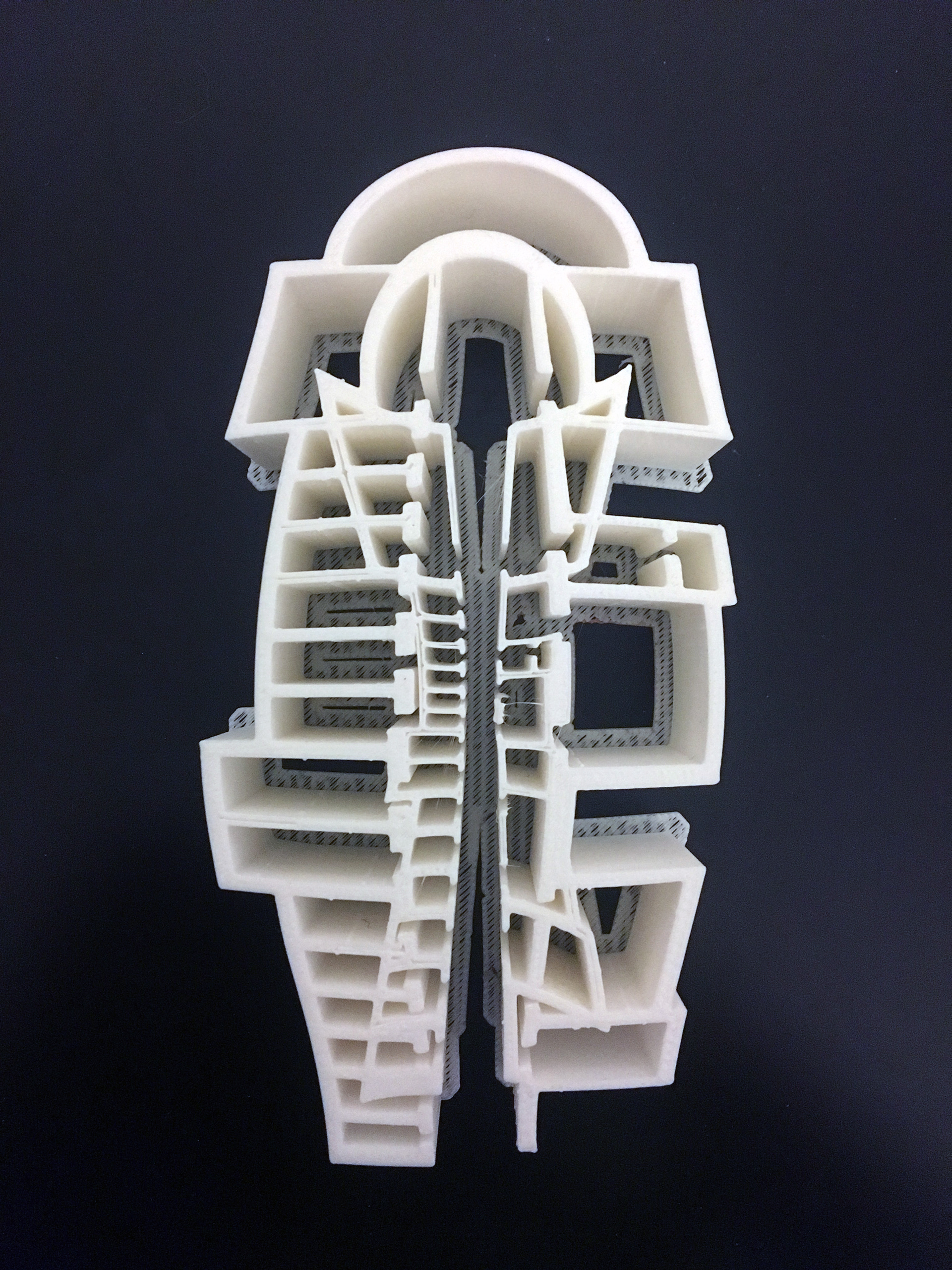 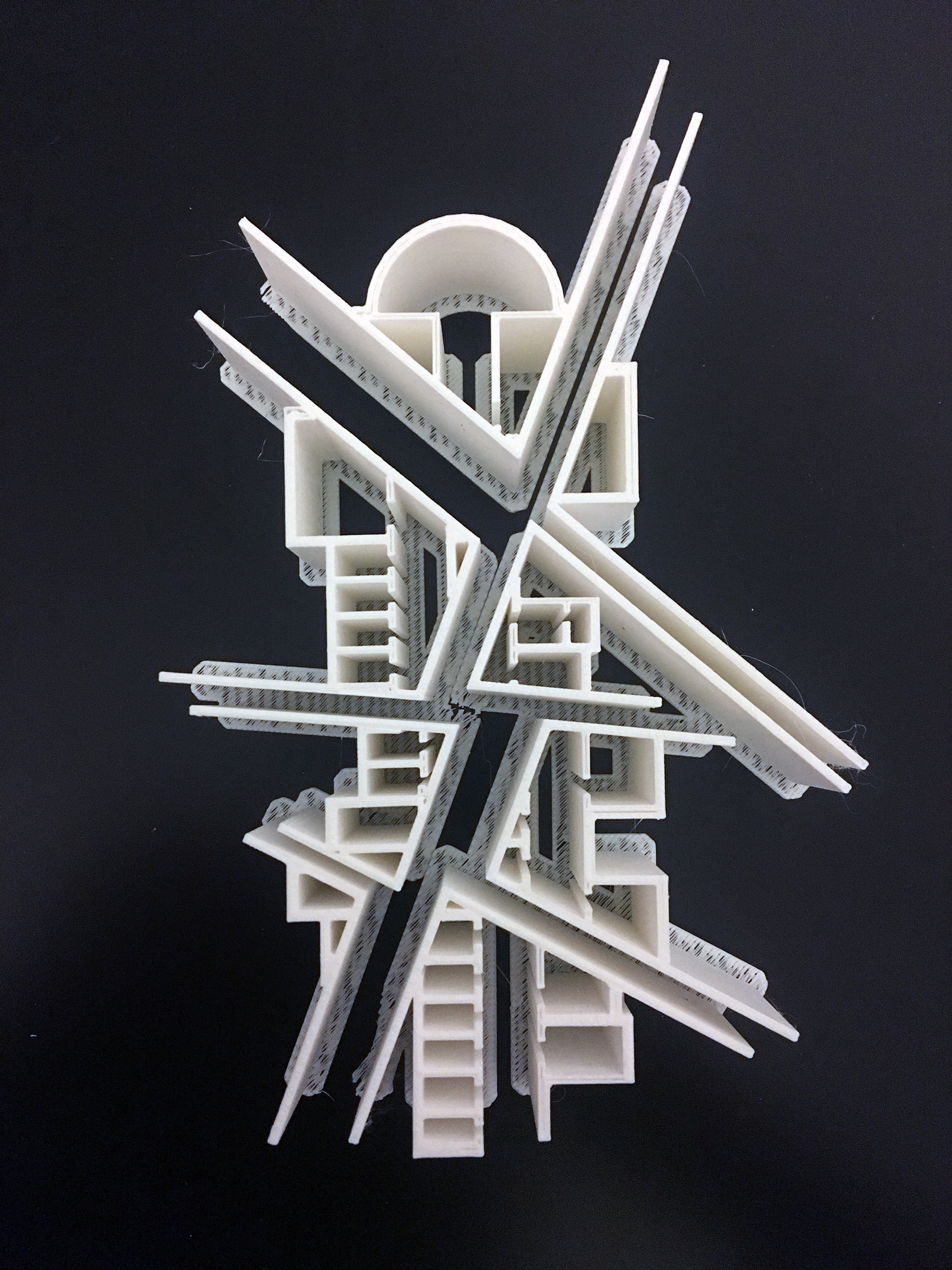 CONCLUSION
Pain in architecture evokes emotional pain through physical pain. Through the spatial studies, the feelings of paranoia, loss, confusion, suffocation, darkness, and claustrophobia can all evoke pain. The violent act of rotating a space and twisting it effectively evoked pain as it created much smaller, isolated and suffocating spaces. Evidently, the composite also effectively evoked emotions of pain as it combined the three spatial studies to create something much more triggering.
It is important to recognize that every act must have a purpose and will foreshadow how people may think and/or feel when creating and/or designing a space. When evoking and triggering such heavy emotions such as pain, this could potentially have a long-term effect on one’s health. It may temporarily evoke memories of loss and heartache, or trigger nausea and illness. In the long-term, such as prison inmates, it will lead to mental illnesses that lead up to violence against others and oneself. A suffocating space may push one to remember negative memories, but over a longer span of time, such negative spaces could erase ones’ memory as they mentally try to escape their reality. As prospecting designers, we must be able to recognize and understand that such built environments may heavily impact ones’ emotional, mental, and physical health and that it is our job to create built environments for the better health and well-being of others.